The British Isles In Depth

From the lively cities to the breathtaking scenery, you’ll discover the best of England, Scotland, Wales, Ireland, and Northern Ireland on this in-depth Britain and Ireland tour. Britain and Ireland are known for their breathtaking scenery, and this tour will not disappoint. You’ll see the 100-mile Ring of Kerry, with its rugged and magnificent landscapes; stunning scenery on Ireland’s Dingle Peninsula; the spectacular 668-foot Cliffs of Moher; Northern Ireland’s awe-inspiring Giant’s Causeway, formed millions of years ago; Brecon Beacons National Park, with its dramatic landscapes; and the Isle of Skye, with some of Scotland’s most spectacular scenery. Enjoy time in the Scottish Highlands, filled with dramatic landscapes, rolling farmland, picturesque seaside towns, and beautiful lochs (lakes). These countries are also known for their picturesque and historic towns and cities. On this Britain and Ireland tour, you’ll visit many of these towns, including Oxford, home to some of England’s most famous colleges; Stratford-upon-Avon, where you’ll get a glimpse into life in 16th-century England in Shakespeare’s hometown; York, England's most complete medieval city with its cobbled streets and the magnificent York Minster; Berwick-upon-Tweed, a peaceful coastal town with a turbulent past; Strathpeffer, known in its Victorian heyday as a spa resort; Looe, a pretty fishing village; the seaside town of Tramore; Bath, known for the excavations of Roman baths used for bathing and socializing 2,000 years ago; and many more. You’ll also visit the capitals-London, Edinburgh, Cardiff, Dublin, and Belfast. These are just some of the many highlights of this tour through the British Isles. For value-minded vacationers, this is the perfect way to see England, Scotland, Wales, Ireland, and Northern Ireland on this in-depth Britain and Ireland tour! 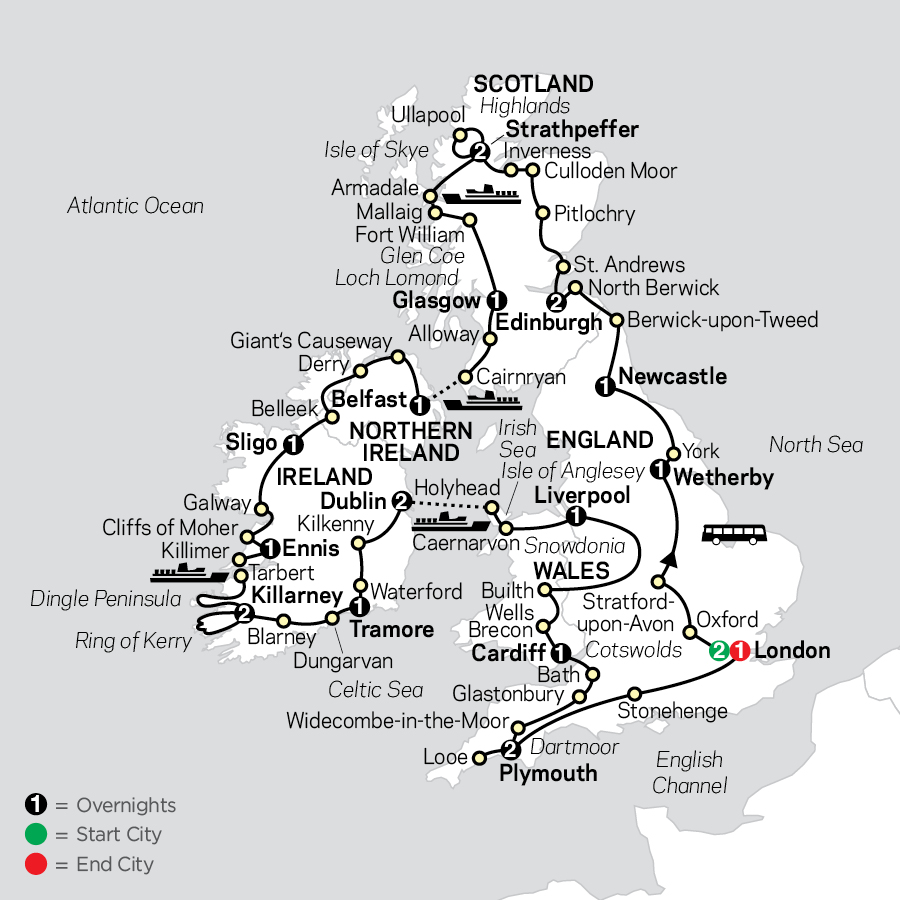